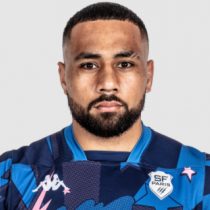 Ngani plays rugby for the Manawatu Turbos, Hurricanes and the All Blacks. Laumape previously played rugby league for the New Zealand Warriors.

In 2013, Laumpape was named in the Junior Kiwis side to play the Junior Kangaroos in Sydney.

Laumape signed with the Manawatu Turbos and Hurricanes in July 2015.

He made his debut for the Hurricanes in the 2016 Super Rugby competition, starting in the inside centre position against the Brumbies.

He returned home to play for Manawatu in the 2016 Mitre 10 Cup and scored a hat-trick in his first game against fellow provincial side, Southland to lead the competition in try-scoring.

On 27 June 2017, Laumape started for the Hurricanes against the touring British and Irish Lions, at home at Westpac Stadium.

Laumape was introduced into the All Blacks squad for the 2017 Pasifika Challenge against Samoa and the three-test series against the touring British and Irish Lions.

By the end of the 2018 Super Rugby season, Laumpae had crossed nine times and was the Hurricanes Player of the Year for the second year running.

Laumape's form was again outstanding he scored seven times for the Hurricanes in 2019.

He added six more Test appearances with the All Blacks in 2018, crossing the chalk against France, Japan and Italy.

In 2020, he made 12 appearances across Super Rugby and Super Rugby Aotearoa scoring three tries.

Injuries hampered Laumape's involvement with the All Blacks in 2020 as made just two appearances taking his test tally to 15.

In May 2021, Stade Francais had confirmed that Laumape had signed with the club and would leave the Hurricanes at the end of the 2021 Super Rugby season.

Hurricanes Player of the Year 2018