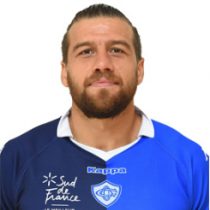 Caminati started rugby at the age of five and went on to join RC Cannes Mandelieu in Fédérale 2 before heading to RC Nice in Fédérale 1.

After 52 appearances at in Nice, Caminati decided to further his career with CA Brive in 2010. He scooped the award for best player in the Pro D2 for the 2012-2013 season.

After spending three seasons at CA Brive, the fullback joined Grenoble in 2013 where he spent two seasons, scoring 72 points in 36 appearances.

At the end of his contract in 2015, he announced that he did not want to continue his career in Grenoble, which led to him signing a 4-month contract with the Toulon to compensate for the absence of internationals who were selected for the World Cup.

In November 2016, he was selected in the French Barbarians team to face Australia in Bordeaux.

The Baa-Baas managed to win 19 to 11 thanks to a try by Raphaël Lakafia in the 77th minute.

In June 2018, Caminati was crowned Top 14 champion with Castres.

February 2020 saw him announce he would leave the club at the end of the that season.