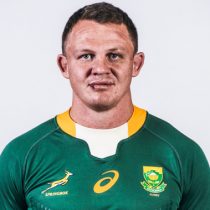 Originally a hooker, Fourie has also played himself into the loose-forward mould as and when The Stormers require it.

An energetic player with surprising power and affinity for playing to the ball, Fourie can often be spotted bursting through a tackle and putting his team on the front foot. A player with heart and determination.

Fourie left Cape Town to link up with French side Lyon for the 2014-15 season and has spent three seasons at the club.

Injury problems kept Fourie out of action for several game weeks, he played 19 times for Lyon in 2016-17 season - 14 times in the domestic league and 5 times in Europe.

At the end of the 2018/19 season, Fourie left Lyon and joined PROD2 side Grenoble.