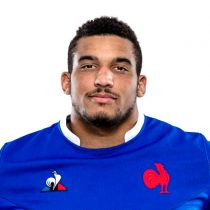 A former Montpelier Academy player Wilfrid Hounkpatin is a big and powerful front-rower.

In 2013 he signed for Narbonne where he spent one season before signing for Stade Rouennais.

Weighing 130kgs, Hounkpatin was one of the most powerful front-rowers in the Fédérale 1 between 2014 and 2018 with his performances for Rouennais catching the eye of Castres with whom he signed a three-year.

The powerful tighthead continued to perform for Castres since his arrival at the club and following an injury to Dorian Aldegheri, he was called into the France Six Nations squad.