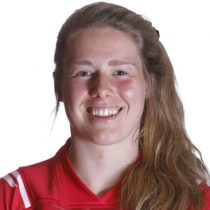 Once fly-half, now a number 8 who can also slot in on the flank and at lock, Sophie de Goede was born into a legendary rugby lineage with her father, Hans de Goede, and mother, Stephanie White both captaining the Canada national side.

A student for the past three years at Queen’s University in Ontario, she grew up playing for Castaway Wanderers in Victoria and in 2016 was named her country’s young female player of the year and followed up her success by linking up with the Canadian Seven side in 2016/17.

Like her parents, de Goede has also skippered Canada at age-grade level and led them into the 2018 Tri Nations Cup, scoring four tries in the opening match against USA.