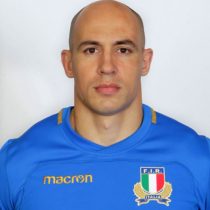 Largely considered on of the best Italian forwards in history, Parisse is a fantastic player to watch and nightmare to play against. His ability to position himself correctly in the line out and tenacity with the ball in hand make him a force to be reckoned with.

He made his international debut at just 18 years of age against New Zealand in Hamilton in 2002. He was the first-ever Italian player to be nominated for the IRB player of the year award. An ever present in the Italian team at number 8, Parisse went to the 2015 World Cup to represent his country on the global stage for the 4th time.

Played all Italy's games at RWC2003 a month after his 20th birthday, has now appeared in four Rugby World Cup tournaments, skippering them at the last two.

Has started more RBS 6 Nations games for Italy than any other player, and has never been on the bench. Is the fourth most experienced test skipper of all time captaining Italy on 73 occasions and is the most capped Italian player ever. Captained Italy to their victory over South Africa in Florence in November - his country's first-ever win over one of the southern hemisphere's 'big three'.

Still regarded as one of the finest no.8s in world rugby, Parisse captained the Azzurri in the 2018 6 Nations and is the most capped player in the squad with 138 caps.

In June 2019, Parisse confirmed that he will leave Stade Francais following 15 years, 258 appearances and scoring 238 points for the club.

He later signed a one-year deal with RC Toulon and joined the club after the Rugby World Cup in Japan.

In June 2020, he signed a new deal with the French giants.