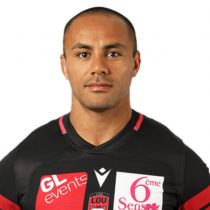 Rudi Wulf joined Toulon on a two-year contract after being left out of the 2010 All Black Tri Nations squad. He previously played for North Harbour in the Air New Zealand Cup and the Auckland-based Blues in the Super 14 competition.

On 1 June 2008, Rudi became a New Zealand All Black for the first time. However, playing in France means he was no longer be eligible to play for the All Blacks. Wulf is regarded as a three quarter, in that he can play wing, fullback and outside centre.

His promising career almost ended before it began when, in June 2005, he suffered a serious injury by diving into the shallow end of a swimming pool and fracturing vertebrae in his neck. He has since made a full recovery.

He played in the 2013 Heineken Cup final which saw his team beat Clermont by 16 points to 15.

Wulf signed at deal with Lyon in 2016 and, after 51 appearances for the side, was offered a contract extension until 2020.

He heads into the 2019/20 Champions Cup season with 30 European Cups, scoring three tries.