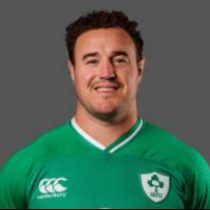 The South African native enjoyed a brief stint with London Irish before returning to his homeland. He joined the London Irish Academy in 2009 and made his senior debut against Northampton in May 2010.

Herring qualifies for Ireland through his grandfather on his mother’s side, who hailed from Belfast & he arrived at Ulster in June 2012 from Western Province, where he was involved in their Vodacom Cup squad.

He Also represented Emerging Ireland as well as the Wolfhounds.

He won his first cap for Ireland when he came on as a substitute against Argentina in June 2014.

In August 2016, after a four-year stint with Ulster, Herring was named the club's captain along side Andrew Trimble for the 2016/17 season.

Herring made his international bow for Ireland in June 2014 in a Summer Tour match versus Argentina. He earned two more caps in Novemeber 2017, making a try-scoring contribution in the historic 38-3 win over South Africa.

As he heads into the 2018 Six Nations, Herring will look to add to his current 3 caps for Ireland.

Herring didn't feature during the Six Nations but has been included in the squad to tour Australia.

Herring was named for the 2020 Six Nations Ireland squad and performed admirably in that competition.