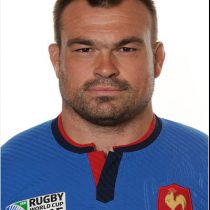 A pillar of Perpignan rugby having started with the club in 2000, Mas played an integral role in Perpignan’s 2003 chase for the Heineken cup where they finished runners up. His tough scrummaging and diversity was picked up on and he made his test debut for France on the tour of New Zealand in 2003. Mas has since become a stalwart for the national side, becoming an anchor of the scum. At the time of writing Mas has amassed 80 caps, and will add to this at the 2015 World Cup, having been named in the 31-man French squad.