The Lions play their first Super Rugby Unlocked home match on Friday evening when they face the Griquas in a testing encounter in Johannesburg. Kick-off at Emirates Airline Park is at 19h00 (SA Time).


Last weekend the Pumas came very close to an upset against the Stormers in Nelspruit, and on Saturday Jimmy Stonehouse and his team are involved in another big home fixture when they face the visiting Sharks. Kick-off in the Mbombela Stadium is at 16h30(SA Time).

The final fixture of the weekend is a traditional North/South battle between the Bulls and the Stormers. The two big rivals face each other on Saturday evening in Pretoria, where the starting time is 19h00(SA Time). The Cheetahs have a bye this weekend.

Super Rugby Unlocked Round Three Player of the Round is Stormers fullback Warrick Gelant who gave a masterclass in attacking fullback play. He made a record number of carries and scored a try in a high scoring match that saw the Stormers come from behind away from home in Nelspruit. He appears back to the form that saw him earn a Springbok call up to the Rugby Worle Cup squad in 2019. The Standings Ahead Of Round Four 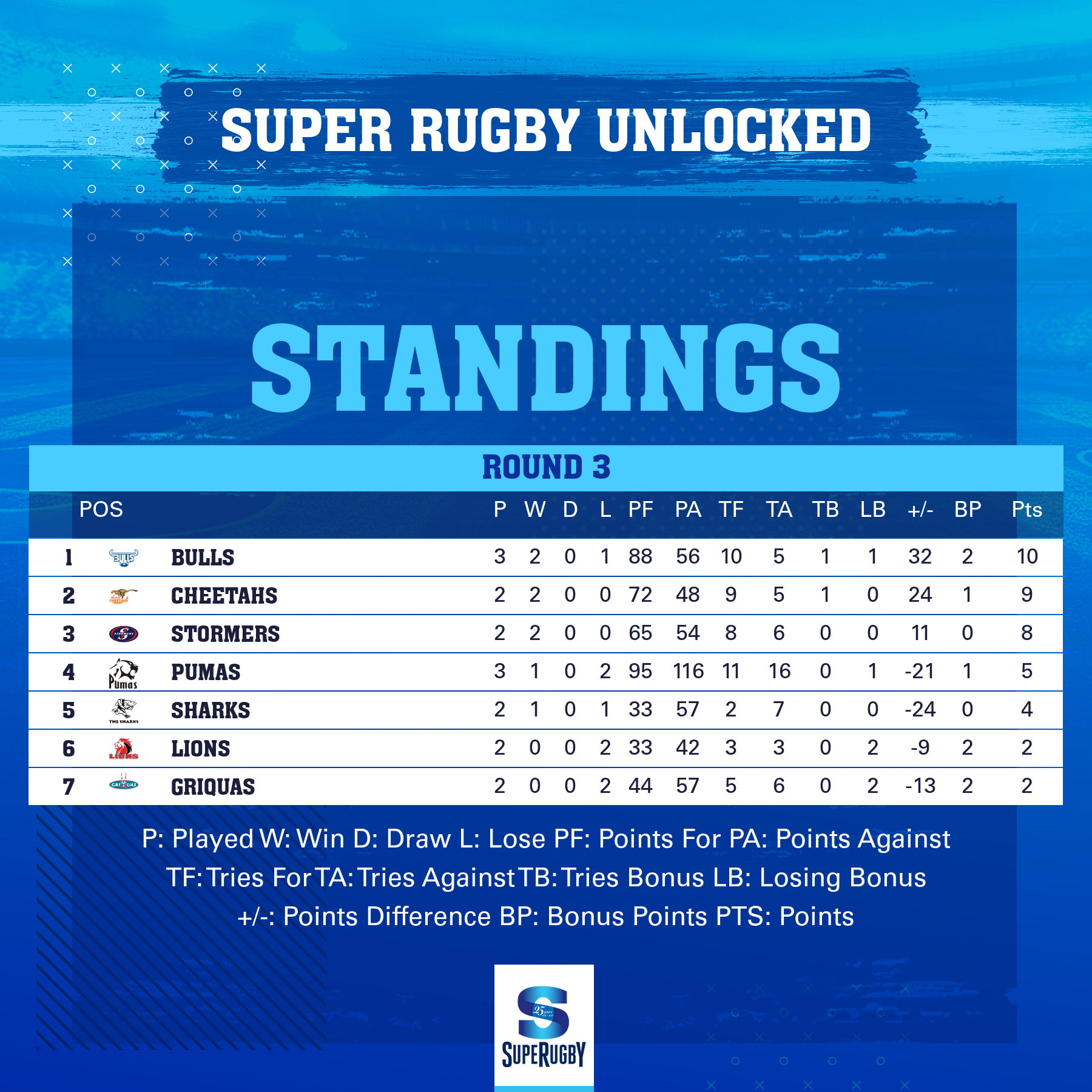 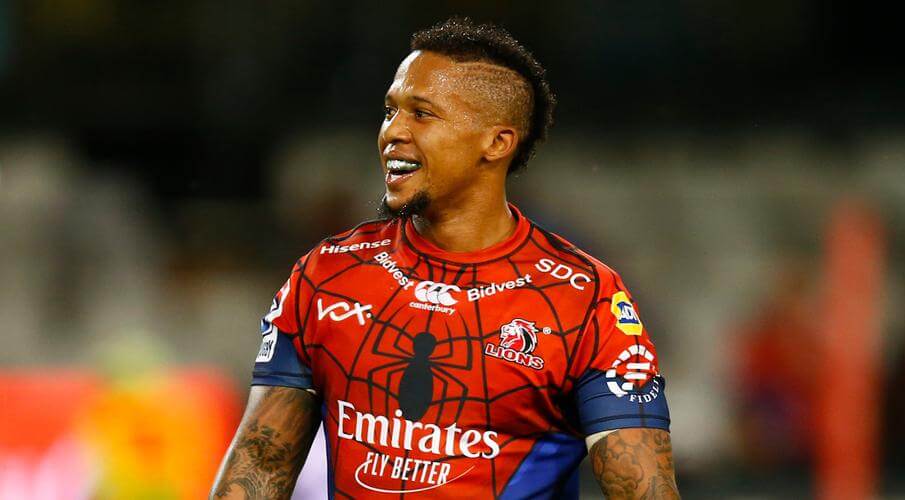 Springbok flyhalf Elton Jantjies has recovered from the calf injury he picked up during a training session last week and will captain the Lions in their Super Rugby Unlocked clash with Griquas in Johannesburg on Friday evening.

The Ellis Park fixture starts at 19h00 (SA Time) and is the Lions first home match of the new campaign, 258 days since their previous match on home turf before the season was suspended due to COVID-19.

Jantjies was not considered for his side’s encounter last weekend against the Cheetahs because of the leg injury, but the match was eventually called off in line with COVID-19 protocols. It was confirmed that Friday evening's clash would go ahead following consultation between SA Rugby and the National Institute for Communicable Diseases (NCID).

Other changes to the Emirates Lions side include the selection of a brand new back trio of Gianni Lombard, Stean Pienaar and Courtnall Skosan. Lombard comes into the side in place of EW Viljoen at fullback, while speedsters Pienaar is preferred over Jamba Ulengo, and Skosan starts instead of Rabz Maxwane.

Griquas coach Scott Mathie has named a much-changed team for their Friday evening encounter. Only six players from their last match – a home defeat to the Phakisa Pumas almost a fortnight ago – have retained their positions in the starting line-up, while there are two positional changes.

The six players who will start in the same positions as two weekends ago, are the midfield pairing of Harlon Klaasen and Andre Swartz, the halfbacks George Whitehead and Zak Burger, Stefan Willemse (flank) and HJ Luus (hooker).

Pumas head coach Jimmy Stonehouse made just two changes to his starting 15 for their round four home clash against the Sharks in Nelspruit on Saturday afternoon.

Stonehouse kept his side that tested the Stormers to the limit last week at the Mbombela Stadium largely intact, making only one change in the front row and another at flyhalf.

Front ranker Liam Hendricks comes into the side as a rotational switch with Morgan Naude, while Fiela Boshoff earned the nod at flyhalf in place of Eddie Fouche.

Meanwhile, Sharks head coach, Sean Everitt, has had to make a few changes due to injury, while also using rotation to keep the squad both fresh but also battle-hardened.

Springbok prop Thomas du Toit is out because of injury and he’s replaced by John-Hubert Meyer.

The loose-forward trio has been rejigged; with James Venter having injured his ankle against the Vodacom Bulls, he is replaced by Dylan Richardson while Sikhumbuzo Notshe is out with a hamstring strain although it is hoped he will be available next week.

Madosh Tambwe (wing) will also get his first run in the competition in place of Werner Kok.

“We weren’t happy with our set-piece, but fortunately it is something we can fix and we’ve worked hard to rectify that. We’re looking forward to redeeming ourselves this weekend,” Everitt explained.”

Springbok Rugby World Cup winning prop Trevor Nyakane will anchor the scrum in the only change to the Bulls starting team for their outing against the Stormers at Loftus Versfeld on Saturday evening.

The starting team will no doubt lean toward the abrasive yet dynamic style of play that former Junior Springbok lock forward Ruan Nortje brings to the table. The talented youngster has made 20 carries and 21 tackles thus far and is one of only two players to do so after three rounds of action.

“The Stormers tend to be our measuring stick and beating them is non-negotiable amongst the players,” said Vodacom Bulls Director of Rugby, Jake White.

Springbok loosehead prop Steven Kitshoff will captain the Stormers for their visit to the capital.

Kitshoff takes over the captaincy from Siya Kolisi, who has been ruled out with a hamstring injury.

Jaco Coetzee, meanwhile, replaces Kolisi on the side of the scrum, while JD Schickerling will start at lock in the only other change to the forward pack.

Stormers Head Coach John Dobson said that his side is looking forward to testing themselves in what should be another North-South classic.

“This match is one of the highlights on the South African rugby calendar, so we are looking forward to taking on that challenge this weekend,” said Dobson.