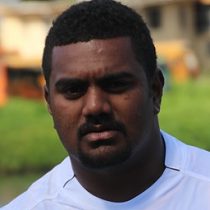 The powerful front rower enjoyed a short stint with the Brumbies in 2015 and made his test debut against Scotland in November 2018.