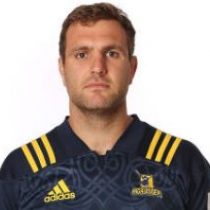 The freshest of the Whitelock recruits to the Crusaders, Luke joined the squad for the 2012 season after being involved in the wider training group in 2011.

He is a loose forward like eldest brother George, but specializes at number 8. He debuted for Canterbury in 2011 and had another excellent season with the provincial side in 2012. Luke also has great leadership potential, already having captained the New Zealand under 20 side in the 2011 IRB Junior World Championship.

Whitelock made his All Black debut against Japan in Tokyo in 2013 and joined the Highlanders in 2016. He has made 62 Super Rugby appearances ahead of the 2017 season and has scored 3 tries.

Whitelock made 11 appearances for the Highlanders during the 2017 Super Rugby season and scored 1 try. He also started in the Highlanders historic victory over the British and Irish Lions playing the full 80 minutes.

Whitelock captained Canterbury during the 2017 Mitre 10 Cup and lead the side to yet another Premiership victory.

Following the success with Canterbury Whitelock was named in the Barbarians squad that faced the All Blacks at Twickenham.

In the week following the match, he was called-up into the All Blacks camp for the Northern Tour as injury cover.

Whitelock was fine form during the opening rounds of Super Rugby and earned a call up to the All Blacks squad ahead of the 2018 June Internationals against France.

Following his recall, Whitelock signed a new deal with the Highlanders, New Zealand Rugby and Canterbury that will run until the end of 2019.

As of 31 May Whitelock has 84 Super Rugby caps (33 for the Highlanders) & has three All Black test caps.

Whitelock went into the 2018 Rugby Championships with 5 test caps.