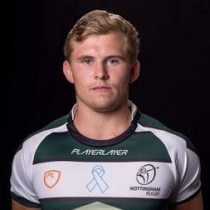 Josh was born in Nottingham and made his debut against Stirling in the B&I Cup in December 2013, and has since been primarily involved in Cup games.

The back row player was hampered with a shoulder injury during the 2015/16 campaign, however he still managed to make a positive impact in the British and Irish Cup, featuring against Cardiff Blues, Cornish Pirates and London Welsh.

Poullet arrived at Nottingham in time for the 2014/15 season, combining his playing with studying for a sports science degree at NTU, where he is also captain of the 1st XV.