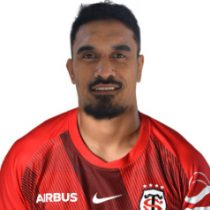 A double Rugby Cup-winning All Black back-rower, Kaino made his professional debut in 2004 for Auckland & his Super Rugby debut for the Blues in 2006.

The Faga'alu native has the rare distinction of playing for every New Zealand national side since first pulling on the black jersey for New Zealand Schools back in 2001.

Kaino's breakthrough at national level came in 2004 when he was named the World Rugby Under 21 Player of the Year, and made his Investec Super Rugby, provincial and All Blacks debuts.

He first played for the All Blacks on the 2004 Northern Tour, with his only appearance against the Barbarians - he made his Test debut against Ireland in 2006 in Hamilton.

By 2008, Kaino was the All Blacks starting No. 6 and his career peak came in the 2011 RWC triumph on home soil, Kaino played all but one minute of the RWC, scoring four tries and was a finalist for World Player of the Year on the back of that effort.

After a demanding World Cup on home soil, Kaino made the switch to the Japanese Top League in March 2012, signing for Toyota Verblitz on a two-year-deal.

He announced his return to New Zealand in October 2013, resigning with New Zealand Rugby Union, North Harbour and Auckland Blues on a two-year contract.

Kaino forced his way back into the All Black jumper after a number of superb performances. He played all seven of the team's 2015 World Cup matches and was again a key contributor as the All Blacks went back to back at the global tournament.

His physicality, defensive fortitude, ball-carrying, and durability were immense for the All Blacks, especially throughout those twin World Cup campaigns, and along with Richie McCaw and Kieran Read he formed one of the finest loose trios the team has ever had.

Kaino started in 68 of his 81 test appearances, the second-most by any All Blacks flanker (to Richie McCaw's 139), and scored 12 tries. His first and last games for the All Blacks were both against the Barbarians.

During the 2017 Lions Tour, Kaino started all 3 of the All Blacks tests against the British and Irish Lions and took his test cap tally to 81 and 12 tries by the end of 2017.

In February 2018, he pulled down the curtain on his career in New Zealand, announcing that he is leaving at the end of the 2018 Super Rugby season to play club rugby in France for Toulouse.

Kaino finished his time with the Blues having made 139 Super Rugby appearances scoring 14 tries.

The All Black flanker enjoyed a stellar stint in France winning two Top 14 titles and Champions Cup trophy claiming European-Domestic double in his final season as a professional player in 2020/21.

Before retiring, Toulouse confirmed that Kaino would join their coaching staff ahead of the 2021/22 season. He played his final game off the bench in the 2020/21 Top 14 final against La Rochelle.