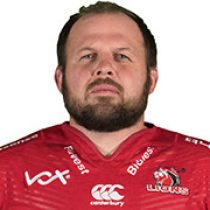 A stand out since age-group rugby, Adriaanse represented South Africa at two U19 IRB World Championships in 2003&2004 and played for Western Province U19 and U21 before making the WP Vodacom Cup team in 2008.

A move to Boland in the same year gave the tighthead his Currie Cup debut and selection for the Emerging South Africa side at the IRB Nations Cup.

It was Griquas for 2010 until the Lions secured his services for Super Rugby and helped them win the Currie Cup in 2011.

The end of 2012 saw Jacobie sign with the Scarlets in the RaboDirect Pro12 on a 3-year contract in the hope of becoming Welsh qualified.

Adriaanse left Scarlets at the end of the 2014–2015 season, having made 51 appearances for the side, but never scored any tries during his time in Wales.

He returned to South Africa to join the Port Elizabeth-based Kings prior to the 2016 Super Rugby season, but left for Bulls after one season.


Adriaanse made 7 appearances for the Bulls during the 2017 Super Rugby, taking his total to 33 caps in total.

In August 2017 the Bulls released Adriaanse from his contract so that he could join the Golden Lions.