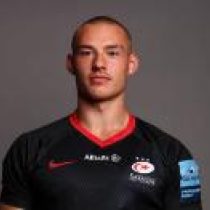 Beaton is a product of Sutton Valence School and featured for Sarries in the Under-18 Academy League.

Prior to this, his performances led to him touring South Africa with England Under-18s at the start of the 2018/19 pathway season and he was also picked for the 2019 Six Nations.

He cemented his name in the England U20s squad that would compete at the 2020 Six Nations and was named for his first start against Scotland in Round 2 of the tournament.