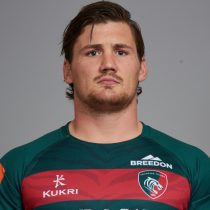 Thompson an English utility back row player who rose quickly through the ranks at Jersey in his two years there, signing from the then National 1 side from Richmond in the summer of 2011. He earned a nomination for Championship Player of the Season in his first year at the club.

Winning the Players' Player of the Season in the 2011/12 season was the Club's top try scorer for two seasons running.

Thompson joined Wasps in 2013/14, the back row player made 25 appearances in his first season in the Premiership and scored nine tries.

Thompson was also nominated for Try of the Season for his try against Leicester Tigers at Welford Road.

After just over 90 appearances and 24 tries for Wasps, he confirmed he will leave the club to join Leicester Tigers when his contract expires at the end of the 2018 season.