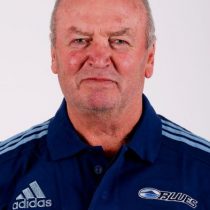 Graham Henry is a former New Zealand rugby coach, and former head of the country's national team, the All Blacks.

He attended Christchurch Boys' High School and furthered his education at University of Otago, where he earned a Diploma in PE in 1969.

His first major role as a coach was as coach of Auckland provincial team from 1992-1991, winning the NPC four years in a row.

After being overlooked for the AB's coaching position in 1998, Henry left NZ to coach Wales & went on to coach the B&I Lions in 2001 tour to Australia.

Following the AB's departure in the 2003 RWC, the coaching job was available and Henry was the only applicant , taking the job at the end of that same year.

In 2005, he coached NZ in their 3-0 series win over the B&I Lions and stepped down from his role in November 2011, finishing his career as one of the most successful rugby coaches of all time.

At the IRB awards in 2011, after guiding NZ to the 2011 RWC victory. The All Blacks were named International Team of the Year and also Henry won Coach of the Year for the 5th time.

Since he left the All Blacks Henry has worked as a consultant for numerous sides and will do so at the 2019 Rugby World Cup with Canada.