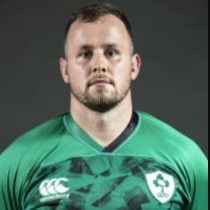 Ed Byrne, a member of a winning Leinster Schools Senior Cup team in Clongowes, came through the Leinster Academy before moving into the senior ranks. He has represented Ireland under-18, under-19 and at under-20 level.

Carlow prop was carving out a nice career for himself having graduated from the Leinster Academy and into the senior side. A debut off the bench in February 2014 against Zebre and then early the following season he started to make serious progress as another four caps were added.

An ACL injury in October 2014 left him on the sidelines for 6 months, the comeback was longer than expected but he was penciled in for an appearance off the bench against Ulster in the pre-season friendly in Kingspan Stadium in August 2015. In the early stages of the game, Byrne suffered another injury in the same knee that kept him out for another lengthy period.

Byrne returned to action with the Leinster A side before progressing to the senior team in the Pro12. In April 2017, Leinster Rugby confirmed that Ed signed a new contract at the club for the 2017/18 season and beyond.

He has made 45 Leinster appearances and has scored 25 points.

Heading into the 2019 Champions Cup, Byrne has made 5 appearances at the tournament.