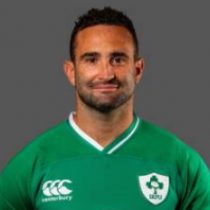 Younger brother of Rob, like his elder sibling, Kearney also credits an early Gaelic career with Cooley Kickhams in Louth as reasons for his fine handling and fielding skills.

In Kearney's third season with Leinster he scored four tries in 13 Magners League matches during the 2010–11 season.

Capped at Ireland U20 and Wolfhounds level Kearney first trained with the senior squad ahead of the 2011 Six Nations.

Kearney has 17 caps for the Ireland U-20 team, and 6 caps for Ireland Wolfhounds. In his second match for the Wolfhounds he scored a try against England Saxons on 28 January 2012.

Kearney made his debut against Samoa, when he came on as a substitute and scored two tries. He played in every game in the 2014 Six Nations Championship when Ireland won their 12th Championship title, being one of only 3 players to play the full 80 minutes in every game, along with his brother Rob, and Jamie Heaslip.

Kearney has been ravaged by toe and ankle complaints in recent times which have kept him out of action for long spells.

In May 2019 he was named in the Ireland RWC Training Squad. He had 17 caps to his name.

Kearney was named for the 2020 Six Nations Ireland squad and has 19 caps.