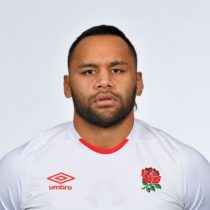 One of the hottest prospects in the English game, Vunipola is a rampaging number 8. Destructive on attack and hard-hitting on defence, Vunipola has represented England at all underage levels and in June of 2013 earned his international debut against Argentina.

Billy joined his brother Mako at Saracens in the summer of 2013 and wore No.8 in both of Saracens winning finals in 2016, vs Racing in the European cup and Exeter in the Premiership. He also started when claimed the Premiership crown in May 2015. He was awarded with the Player of the Year honour at the 2016 RPA awards in May.

Billy spent the opening two years of his career at London Wasps before announcing in the summer of 2013 that he would be joining brother Mako at Saracens. The big number 8 and was selected into England's RWC squad, coming off the bench in the opening game against Fiji scoring a try but strained knee ligaments in round 2 defeat to Wales ended his tournament.

In February 2016 Billy, along with his brother Mako, signed two-year contract extensions with Saracens which would keep them at Allianz Park until 2019.

2016 was a big year for Vunipola as he was included in a six-man shortlist for World Rugby Player of the Year 2016 and was awarded with three-man of the match awards in England's Six Nations Grand Slam-winning campaign, while also performing admirably in England's 3-0 series triumph touring Australia in Summer 2016.

He played in the first three autumn internationals in 2016 but a knee injury in the first half vs Argentina kept him out of rugby for 3 months, with him returning to the team for the final two rounds of the 2017 Six Nations as England retained the 6 Nations crown.

He was selected in his maiden British and Irish Lions tour, as he made the 41-man squad to tour NZ. At the time of selection, Vunipola had made 36 England caps. Unfortunately, he was forced to withdraw from the squad after occurring a shoulder injury in Saracens' Premiership Semi-Final defeat to Exeter Chiefs.

Vunipola helped Saracens secure the Champions Cup and Premiership title during the 2018/19 season before going on to be selected in England's RWC squad. He earned his 50th test cap in the semi-final win over the All Blacks before he started against South Africa in the final that England lost.

Vunipola returned to Saracens following the World Cup having already racked up 42 European caps and three titles in the competition.