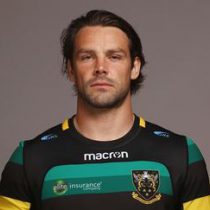 Fantastically quick, with an elusive step Ben Foden has been one of Europe’s most consistent fullbacks over the last few seasons. Foden has played scrum half wing and fullback for England. Indeed, his first cap came as a replacement for scrum-half Harry Ellis in a 2009 Six Nations game against Italy.

At international level, Ben represented England at Under-16s, Under-19s and Under-21s before representing the England Saxons at the 2008 Churchill Cup.

Foden found himself behind two internationally recognized scrum-halves at Sale Sharks, Richard Wigglesworth and Dwayne Peel, and, retrospectively, his switch to the Northampton Saints in 2008 was a master-stroke. Foden made 31 appearances in his maiden Saints season, mostly at fullback where he played and scored on his first England start against France in March 2010.

Educated at Bishop Heber High School and Bromsgrove School, Ben’s professional career started at Sale Sharks in 2004, and he was a replacement in Sale Sharks’ 2006 Premiership final victory over Leicester Tigers.

He joined the Saints in 2008 with aspirations of establishing himself at scrum-half. However, he subsequently impressed at fullback, with a string of impressive performances in the 15 jersey.

He has since become a regular at fullback in the Saints starting XV. In his first season at the Saints, Ben helped the club win the 2009 European Challenge Cup and played a major role in the double Cup-winning side of 2014, scoring a try in the Aviva Premiership final against Saracens. In doing so, he became only the second player after Lewis Moody to score in two consecutive Premiership finals.

Ben made his full England debut as a replacement scrum-half in the 2009 Six Nations against Italy at Twickenham before playing in a non-capped match against the Barbarians in May 2009. In 2010 he became a regular in the England side and was part of England’s squad at the 2011 Rugby World Cup, scoring tries against Romania and France.

In May 2018, Northampton Saints confirmed that Foden would leave the club at the season at the season after 10 years and 250 appearances with the club.

Later that month MLR side New York announced that Foden would join them for their debut season in the competition in 2019.