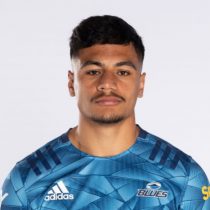 Another talented back coming out of the Auckland rugby system Tanielu Tele'a attended St Kent where he impressed and was selected in the Auckland U19 team that won the Jock Hobbs national tournament in Taupo.

The blockbusting midfielder was a member of New Zealand Schools and was named in the Auckland 2017 Mitre 10 Cup squad having represented the Samoa u20s at the World Under-20 Championship earlier that year.

Tele'a was named in the Blues Brisbane 10s side that went onto win the tournament and was later named in the New Zealand u20 squad for the Oceania Rugby Championship campaign.

Ahead of the 2018 World Under-20 Championship Tele'a signed a two-year deal with the Blues that saw him being included in the 2019 Super Rugby squad.

Tanielu made his debut for The Blues from the bench against The Sharks in round 2 of the 2019 Super Rugby season.

He made his Super Rugby starting debut against the Jaguares in Buenos Aires in Round 3 of the 2019 season.

A series of eye catching individual tries saw him become a regular feature on the wing, dueling with fellow young gun Caleb Clarke for a spot in the match day 15.

With 9 caps to his name at the end of his rookie season, Tanielu can add experience to his naturally powerful running game.

A competitive back three in the Blues squad meant Tele'a didn't add to his cap tally in 2020 as he heads into another season of Mitre 10 Cup action with Auckland.