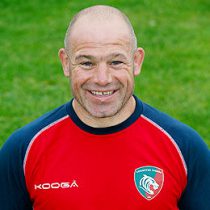 The former England hooker has a Leicester Tigers career spanning more than two decades in two spells as player, coach and director of rugby.

He also earned 27 caps for England.

After two years with Montferrand in France, Cockerill returned to Leicester for a second spell as a player and joined the coaching staff, initially with the academy.

He worked as forwards coach and twice as interim head coach before being named head coach as Tigers won the Premiership title and reached the European Cup Final in 2009.

Tigers retained the Premiership crown in 2010 and Cockerill became director of rugby in July that year.

Cockerill worked as forwards coach under Pat Howard and stepped up as interim head coach in 2007/08 before the arrival of Marcelo Loffreda and again during 2008/09 after the departure of Heyneke Meyer before being named head coach as Tigers won the Premiership title that season.

The 27 time-capped hooker for England was released by Leicester in January 2017 and immediately took up a consultancy role with Toulon in the French Top 14.

On 20th February 2017, Cockerill was announced as the Edinburgh coach for the 2017/18 campaign, signing on a two-year deal. On 4th April, Cockerill was left in charge of the Toulon first team following the exit of Mike Ford, until the end of the season.

In April 2018, Cockerill signed a contract extension which will see him stay at the club until 2021.

He subsequently led the club to its first-ever appearance in the Guinness PRO14 Final Series which also brought qualification for the Heineken Champions Cup the following season.

In July 2021, Edinburgh announced that Cockerill would leave the club to pursue other opportunities.

September 2021 saw him being named as a forwards coach for England, working alongside Matt Proudfoot.

When Eddie Jones got fired on the 6th of December 2022 he was appointed to take over the day to day running of the men's performance team. He was then moved to scrum coach when Borthwick was appointed Head coach.

7th of Feb 2023 it was announced that Richard would leave England to join Montpellier as forwards coach.