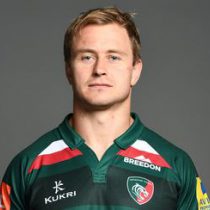 The versatile back shot into the spotlight as an 18-year-old when he made his Test match debut for England at centre. While he has been in and out of the England setup throughout his career, he did pick up a runners-up medal with his country during the 2007 World Cup.

Tait has starred for the Newcastle Falcons and Sale Sharks in the past before the quick and elusive back joined the Tigers in 2011.

Former England international Tait recently passed 100 appearances for the club since his Tigers debut in 2011 and he captained the team to victory in the Anglo-Welsh Cup Final in March 2017 as the club collected its first silverware in four years.

Leicester Tigers agreed new contract terms with Tait beyond the end of the 2016/17 season.

In February 2019, Tait announced his retirement from rugby after failing to fully recover from an Achilles injury.