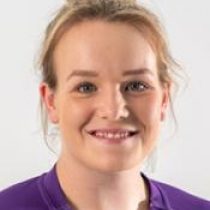 At university she obtained a degree in primary education with qualified teacher status before becoming a teaching assistant at Carnforth Primary School in Worcester. She is now a full-time rugby player, having been awarded an England contract in January 2019.

Her rugby education included playing for Luctonians and the Worcester U15 team which led to appearances for Worcester Valkyries and her university’s first XV.

Her international breakthrough came for the England U20 side, for which she made eight appearances, including four against France.

She also became captain of the Worcester Valkyries for the inaugural Tyrrells Premier 15s season in September 2017, a role she continues to this day.

Lark made her first start for England against Italy at the start of the 2018 Women’s Six Nations, her 10th cap overall. She then scored twice in England’s 27-19 victory over Canada at Doncaster’s Castle Park in November 2018.

In the 2019 she featured in every game of the Women’s Six Nations, and scored two tries, as the Red Roses won the Grand Slam.

By the end of the Six Nations she took her test cap tally to 18.