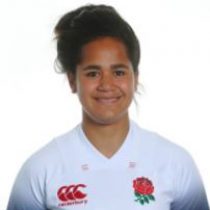 Niece of Fijian captain Akapusi Qera, Lagi Tuima is a hard running centre, who is comfortable at fullback, represents the Bristol Ladies.

After a stint with Plymouth Albion Ladies she was signed by Bristol Ladies for the Tyrrells Premier 15s 2017/18season and after only two months of top flight rugby, she was called up to the England squad and made her debut as replacement against Canada.

A few days later, at the age of 19, she made her first international start at Twickenham Stadium as the Red Roses completed a series whitewash against the Canadians at the Home of England Rugby.

In January Tuima was named in England's 2018 6 Nations squad and made her debut in the tournament as a replacement against Wales. She scored her first try against Scotland later in the tournament.

August 2019 saw her sign a deal with Harlequins Women.