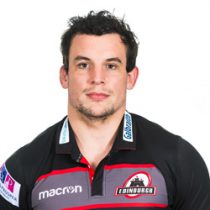 Part of the New Zealand U19 team that won the Junior World Championship in 2007. Played provincial rugby in New Zealand for Southland Stags and Super Rugby for Highlanders, helping them to win the 2015 crown

Hardie made his Highlanders debut in 2010 against the Crusaders and played 11 of the 13 games in his first season. 2011 was another solid season for Hardie with plenty of game time. He is a strong ball runner and his tenacity at the breakdown resulted in numerous turnovers for the Highlanders in 2011.

A typically rugged loose forward, Hardie had a stellar 2011 ITM Cup Season for the Southland Stags and his form has carried through to the following seasons.

Not only is Hardie a Ranfurley Shield winner but in 2015 he and the Highlanders defied the odds to win the Super Rugby title. His form was not unnoticed on the international stage where, through his grandmother, qualified for Scotland and earned an extended squad call up by Vern Cotter ahead of the 2015 RWC. After Scotland's exit at the RWC he announced his signing with Edinburgh Rugby.

Made his RBS 6 Nations debut in the 2016 round 1 defeat to England at BT Murrayfield. Started all five games last year and scored his first try in the tournament against Italy in round 3.

Toured to Japan last summer playing in both tests but then an ankle injury picked up in the opening autumn international has kept him out of rugby for 2 months.

Hardie joined Edinburgh from Super Rugby side the Highlanders, and made his debut in the Challenge Cup win over Grenoble at BT Murrayfield on 13 November 2015, before scoring his first try for the club the following week in the away win over Agen.

The back-row joined the capital club following the national team’s Rugby World Cup campaign in 2015 and has since made 19 appearances in the black and red.

Scotland international flanker Hardie re-signed with Edinburgh on a one-year contract for the 2017 - 2018 season.

In May 2017, Hardie was included in Gregor Townsend's three-Test summer tour squad. The back-rower has 16 caps to his name.

In March 2018, Hardie was not offered a new deal at Edinburgh Rugby, with head coach Richard Cockerill stating that financial considerations and the need to balance the squad on a tight budget had been the driving factor in the decision not to renew Hardie's contract.

Hardie spent time in Clermont where he trained with the squad but was ultimately not offered a deal with the side.

In October 2018, he signed a deal with Newcastle Falcons as injury cover for Will Welch.