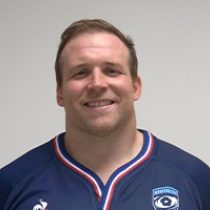 Born in Kingston, England, Thomas attended the illustrious Millfield School before moving on to the University of Manchester.

A tighthead prop, Thomas has proved himself as one of the English game's brightest prospects having represented England and turned out for the Saxons side.

After a stint at Bristol, he signed with Sale in the English Premiership and became a permanent fixture in their side.

Thomas won seven caps with England during his spell with Sale Sharks, before returning home to the West Country to sign a three-year deal with Bath ahead of the 2014/15 season.

April 2020 sees the seven cap England international work his way back from an ACL injury he sustained against Wasps having suffered a similar injury to the other knee in 2016.

Thomas is out of contract at The Rec at the end of the current having barely played in recent years due to his series of serious injuries.