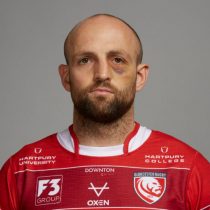 Sharples was dual registered with Moseley for both the 2007–08 and 2008-09 seasons. Sharples scored 18 tries in the 2010/11 season including four tries against the Newport-Gwent Dragons, and made his England debut against Wales in a World Cup warm-up match on 6 August.

Charlie, then a member of the Gloucester Rugby Academy, made a dramatic impact on the first team squad in 2008-9.

He was set to represent England U20s against Wales but was recalled by the club and went on to make 9 first team appearances, scoring a memorable first senior try against Bath.

Was named in the England U20 squad for the Junior World Championship in Japan in June 2009 and kicked on to enjoy a memorable 2009-10 season for Gloucester. He scored 12 tries from 18 starts (including friendlies) and was shortlisted for Try of the Year at the Guinness Premiership Awards.

2010-11 went even better for Charlie as he scored 18 tries in 29 appearances, was voted Young Player of the Year by the supporters and was selected for England Saxons.

Charlie was named in England's Rugby World Cup training squad in the summer, making his international debut as a replacement against Wales.

2011-12 was another fine campaign at club level with his try scoring tally in double figures once again and a first England start, in Paris against France. Has since added to his England cap tally, and scored his first international try against Fiji.

On his 150th appearance in October 2014, Charlie crossed for a hat-trick as Gloucester opened up the European Rugby Challenge Cup with a 55-0 win over CA Brive.

Charlie signed a new long term contract with the club in July 2015 and was enjoying a fine 2015-16 season until suffering a season-ending knee injury. Was voted Player of the Season at the club's End of Season Awards dinner.