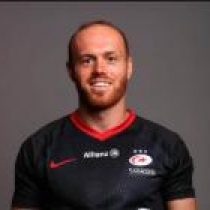 Formerly of Northampton Saints’ Academy, the scrum-half had great success early on in his career with England Under-20s.

Alex was a member of the England u20 in the 2013 IRB Junior World Championships, in which England were victorious.

Alex signed with Cornish Pirates from Northampton Saints in April 2015 as he went in search of more regular game time. His precision around the rucks and quick thinking are some of the qualities that earned his so many starts at the Pirates.

Regarded as one of the best nines in the Championship due to his great core skills, he was voted Cornish Pirates’ Players’ Player of the Year for the 2017/18 campaign making over 50 appearances for the side.

Day went on to make his Sarries Premiership debut in August 2020. Unfortunately, game time was limited due to competition from the likes of Richard Wigglesworth, Aled Davies and Tom Whiteley.