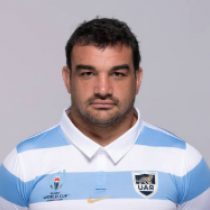 A dynamic and experienced front-row forward, Creevy has enjoyed a strong career in French rugby after spells with Biarritz Olympique, Clermont Auvergne, and Montpellier Herault. Creevy first appeared for his country, Argentina, back in 2005 against Japan.

He is known as a mobile hooker with some very good ball-handling skills, his good offloading skills have led him to become called "Sonny Bill" Creevy.

The front row turned down other offers from both France and England to make the switch in the summer of 2013 and join Worcester Warriors.

Creevy also captained Argentina when they played Warriors in a friendly at Sixways on the eve of the Rugby World Cup in 2011, where he featured in all five games for the Pumas.

The former Worcester man, who can also be deployed as a flanker, was named captain for Argentina in the 2014 Rugby Championship.

He was part of the national team that competed at the 2015 Rugby World Cup. In December 2015, Creevy announced that he would be joining Buenos-Aires outfit Jaguares in 2016 Super Rugby.

He was named in Los Pumas squad for the 2017 November Tests having won 68 caps for his country coming into the game against Ireland.

As of June 2020, Creevy has made 89 appearances for Argentina, 59 of them being starts.

In August 2020, he signed a deal with London Irish. His stay at the Exiles was later extended following 12 appearances.