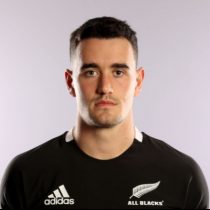 Jordan was a standout performer for the Christchurch Boys' High School First XV in 2015, scoring 19 tries in 11 games to finish the UC Championship as the competition's leading try-scorer.

He was named in the Crusaders Knights development team and played for the Canterbury Under-19s in 2016 and is another product of the Crusaders Academy.

Later in 2017, he was the standout for the New Zealand under-20 squad that won the 2017 Junior World Championship in Georgia.

He was selected in the Tasman provincial team for the 2017 Mitre 10 Cup and had a remarkable debut season. He was second only to Braydon Ennor for the number of clean breaks across the season.

After the Mitre 10 Cup season Jordan signed a Super Rugby contract with the Crusaders for the 2018 season, having shown how dangerous he is on attack, and how strong with ball in hand he is.

He knows his way to the try line scoring 5 tries in 10 matches for Tasman.

Jordan has been selected for the Crusaders ahead of the 2020 Super Rugby season. He as 10 tries in 12 Super Rugby matches so far.

He heads into the 2020 Mitre 10 Cup season having made 32 appearances for Tasman Makos.