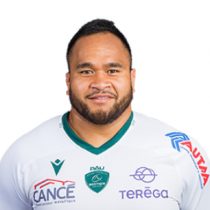 Born in Tonga, Tokolahi switched to St. Bede's College in Christchurch in 2009 which made him eligible to play for Canterbury's youth sides and later their ITM Cup team.

After graduating high-school, Tokolahi played for Canterbury's academy in 2012 and the Crusaders Knights development squad in 2013 before making his senior debut for Canterbury during the 2014 ITM Cup. He made 7 appearances in 2014, 2 starts and 5 from the bench and his ability to play in both the loosehead and tighthead prop positions saw him earn a contract with the Chiefs ahead of the 2015 Super Rugby season.

He was included in the Highlanders squad for the 2017 Super Rugby season, having already made 28 appearances in the competition.

Tokolahi featured in all 16 of the Highlanders 2017 Super Rugby matches and started in their historic victory over the British and Irish Lions.

Tokolahi was then named in the Canterbury Mitre 10 Cup squad and help the side to another Premiership final.

Another strong start to the 2018 Super Rugby season saw Tokolahi sign a new deal with the Highlanders for the 2019 season.

Tokolahi took his cap tally with the Highlanders to 95 before signing a deal with Top 14 club Pau ahead of the 2021/22 season.