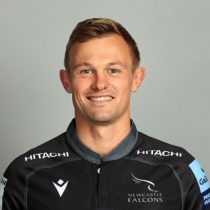 An England international at Under-16s, 18s and 20s level, Stuart was part of Harlequins' academy before joining near neighbours Richmond.

During his time at Harlequins Stuart made three Premiership appearances, also featuring for the club in the Heineken Cup and LV= Cup.

The Cheltenham-born scrum-half joined Newcastle Falcons in the summer of 2017.