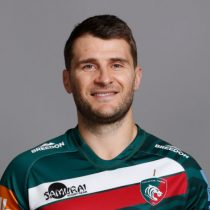 The experienced England scrumhalf spent eight years with Sale Sharks before moving to Saracens in 2010.

The move bore fruit as his impressive form for Sarries earned him and England recall and a place in the squad for the 2011 World Cup.

While having a quick pass and eye for the gap at scrumhalf, Wigglesworth is also more than able to play flyhalf or wing.

His strong left boot is also an additional asset if he plays inside a right-footed playmaker.

He was named in the English squad for the 2015 Rugby World Cup.

In May 2017, Wigglesworth was named in the England squad to face the Barbarians, having won 27 caps.

He was called into the England 6 Nations squad as an injury replacement in February 2018 and added to his 27 Test caps having last played a test match for England in 2015.

He featured in 4 of England's 5 Six Nations matches and was named in England's June Test Squad.

In September 2018, Wigglesworth made his 266th cap for Saracens in Round 4 of a Premiership match against Gloucester, overtaking former captain Steve Borthwick as the all-time Premiership appearance holder.

After assisting Ealing Trailfinders in the coaching department he was appointed attack coach of the Championship side in April 2019 which he will fulfill while still playing for Saracens.

He served as the defence and kicking coach of Canada at the 2019 Rugby World Cup.

In November 2020, he signed a deal with Leicester Tigers.