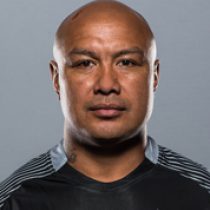 Latu began his rugby career with New Zealand side Bay of Plenty in 2004, spending three years there as well as playing Super Rugby for both the Chiefs and Hurricanes.

In late 2006, Latu was drafted into the Hurricanes squad as cover for All Black absentees Jerry Collins and Rodney So'oialo for the 2007 season.

Moving to Japan in 2007 Latu then spent eight years with the NEC Rockets, making 63 appearances and scoring 165 points in his time with the club before signing for Newcastle.

He made his debut for Tonga against Japan in 2006 and went on to captain the side in the 2015 Rugby World Cup, which saw his side playing world champions New Zealand at Newcastle’s St James’ Park.

Latu joined Newcastle in the summer of 2015 from Japanese side NEC Green Rockets, becoming an instant hit with his dextrous and prolific approach to back-row play.

Named as 2015-16 players’ player of the season after a sensational debut campaign, Latu finished the season as the club’s top try-scorer after dotting down a hat-trick against Sale Sharks on the final day of the campaign.

Going on to become Tonga’s most-capped player of all time, his handling and work rate make him a stand-out performer.

A serious knee injury sustained on national team duty severely restricted his appearances during the 2016-17 campaign, but he returned at the end of the season and went on to score in Tonga's Pacific Nations Cup victory over Samoa in the summer of 2017.

In May 2018, it was confirmed that Latu would leave Newcastle Falcons to play in Japan.