What If The Springboks Needed To Select Players From Europe and Australasia For The Rugby Championship?

Jacques Nienaber is set to kick off his tenure as the new Springbok coach during the Rugby Championship which is set to be held exclusively in New Zealand. However, Nienaber has hinted that the national team could sit out this year's tournament if they do not get sufficient game time in the period leading up thereto.

In an interview with The Rapport, the Bok coach said his players would need to have an extended run of domestic matches, much like Super Rugby AU and Super Rugby Aotearoa, before the Rugby Championship to ensure his players are fit to play test rugby.

"We have a responsibility to ensure that the players have received sufficient conditioning so that they can play rugby," Nienaber said.

"If we can't play six games, then I don't think we will go. The player well-being risk would just be too great."

The southern hemisphere's premier international competition was initially scheduled for August but is now set to be held in November with Nienaber doubtful that South Africa's domestic competition will kick off before the end of August. While New Zealand and Australia have eligibility rules around the selection of overseas-based players, South Africa do not, with the likes of Cheslin Kolbe and Rynhardt Elstadt both making their test debuts while based abroad.

The relaxed eligibility laws mean that South Africa could turn to players based abroad to feature in the competition. This notion holds water, as rugby is already underway in New Zealand and Australia while the United Kingdom and France are soon to follow, which means that the South African players in the latter two nations will enjoy a higher level of match fitness than the players based in South Africa when the Rugby Championship is set to begin. A number of players from the team that won the Rugby World Cup are currently based in Europe while the others who are based in South Africa or Japan will not have played enough rugby to be test match fit, according to Nienaber.

This theory could come with its own stumbling blocks with England’s top clubs saying they have reluctantly been forced to accept World Rugby’s plan to temporarily extend this autumn’s international window which is likely to go into December with French clubs having also sent a letter on July 16 to World Rugby threatening to take legal action on any changes to regulation nine, which guarantees the availability of players for the international window. via Telegraph

However, if Nienaber were to force regulation nine and select an entirely European and Australasian-based squad for the Rugby Championship, the new boss said he would look at selecting around 45 players to head to New Zealand due to the numerous challenges around the quarantining of players if a replacement is needed for injuries or a player requests to return home for family reasons. The massive number of South Africans plying their trade abroad means that he would have plenty of options with the suggested 23 we have put together featuring just one uncapped player. The front row would be one of the most difficult groups to finalise with Tendai Mtawarira retiring from test rugby, Schalk Brits retiring altogether and Malcolm Marx unlikely to play any club rugby until next year. The remainder of the props and hookers from the World Cup-winning squad, except for one, are all still contracted to South African franchises.

There are still plenty of options with numerous South African front-rowers currently playing in Europe and Australasia. Springboks Coenie Oosthuizen, Bismarck du Plessis, Vincent Koch and Wilco Louw will have all featured in European competitions with Reds prop Jean-Pierre Smith able to take on the prop role. South Africans Pierre Schoeman, Francois van Wyk, Juan Schoeman, Nick Schonert, Keynan Knox, Ruan Smith, Chris Heiberg, Maks van Dyk and Lourens Adriaanse all are able to be called up but the likes of Knox, Schoeman and Schonert's eligibility due to their contracts could be problematic.

At hooker, Bismarck du Plessis' test career could have one final chapter with Akker van der Merwe backing him up alongside recently signed Bordeaux hooker Joseph Dweba. Wellington-based Ricky Riccitelli could also get called up but could face similar eligibility and contractual problems.

The number of South African second rowers plying their trade abroad is endless but included on that list are three of the four locks who played in the Rugby World Cup for the Springboks in RG Snyman, Eben Etzebeth and Lood de Jager. Fellow Springbok Ruan Botha is also in Europe while Jannes Kirsten, Gerbandt Grobler, Etienne Oosthuizen, Jacques du Plessis and Nico Janse van Rensburg have displayed excellent form recently.

None of the back-rowers at the Rugby World Cup would be available if picked from Europe and Australasia with Francois Louw the only player who could possibly have featured but the former Bath man has already called time on his rugby career. Nienaber could still select an entire squad with capped internationals such as Rynhardt Elstadt, Jean-Luc du Preez and Marcell Coetzee (all making our selected XV) and Dan du Preez off the bench.

Two of the three Springbok scrum-halves who served at the World Cup are currently in Europe; Faf de Klerk at Sale Sharks and Cobus Reinach at Montpellier. Filling the third spot in the squad may require a debutant in Nic Groom or James Hall. Nienaber may also coax the experienced Francois Hougaard back into the green & gold jersey. Finally, Rebels' scrumhalf Ryan Louwrens could prove a more accessible option.

Handre Pollard could continue as the side's flyhalf with his back-up option coming from Montpellier too in Johan Goosen but we have opted to selected the latter at fullback as Willie Le Roux has lacked game time in Japan. There are other options to back Pollard up, though, with Jaco van der Walt in Scotland and Robert du Preez at Sale Sharks. Damian de Allende and Jan Serfontein could rekindle their test partnership in the midfield with Harlequins' new signing Andre Esterhuizen also in the mix. Wasps' centre Juan de Jongh may also reignite his test career as too could Worcester's Francois Venter and Sale's Rohan Janse van Rensburg. Lionel Mapoe will be turning out in France's third division but was also involved with the test side not too long ago. Finally, former Cheetah Nico Lee is also in France. 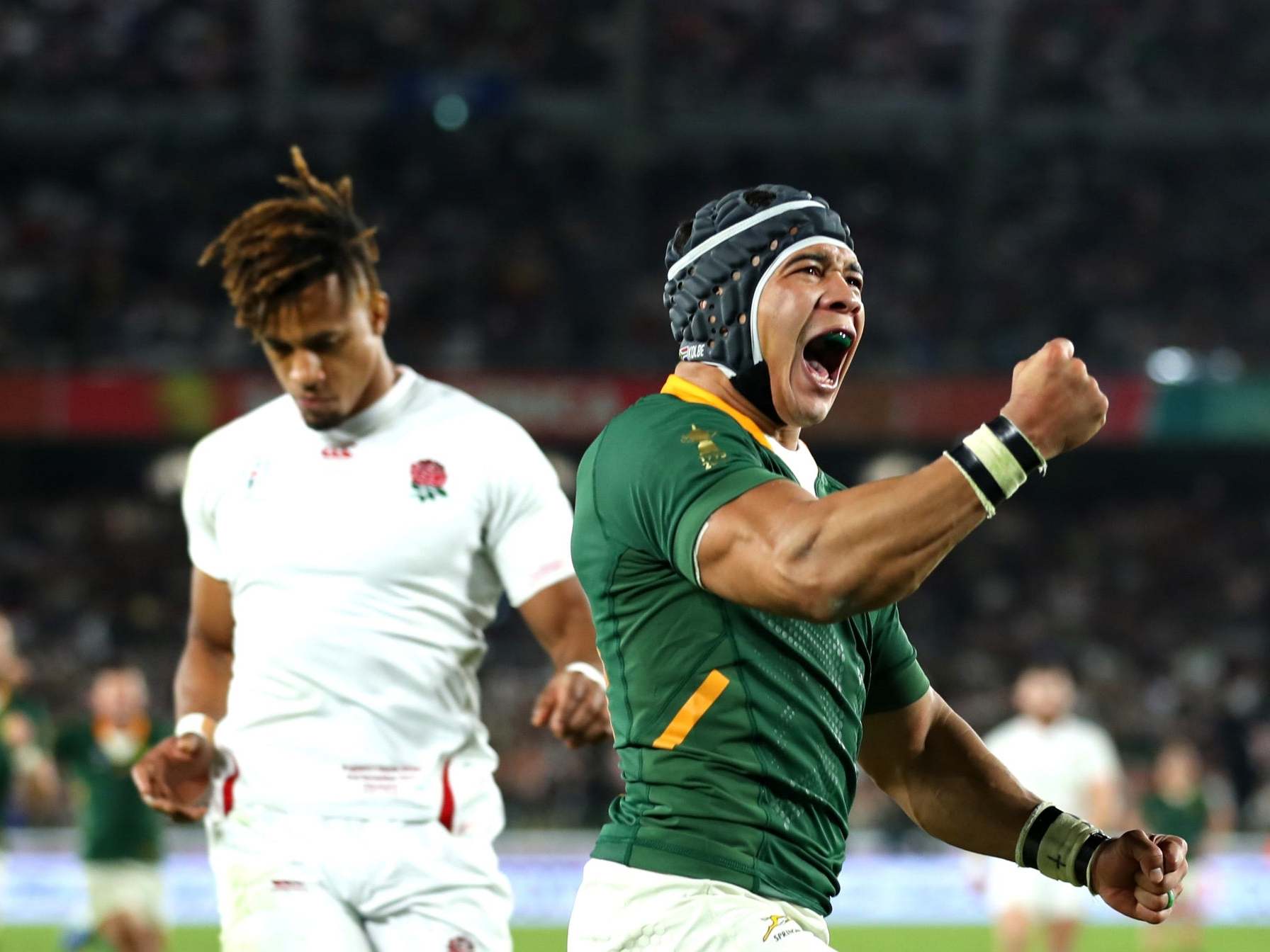 The outside backs may prove to be the most interesting bit of selection with a mixture of players from Europe and Australasia. In our XV we have selected La Rochelle bound Dillyn Leyds on the left wing with Cheslin Kolbe and Johan Goosen completing the side. Harlequins' new signing Tyrone Green impressed during his time at the Lions and could also come into the fix for any of the outside back positions.


However, Nienaber could pull an unprecedented move in luring Hurricanes' back Wes Goosen into the side as the man is able to play at centre, wing or fullback. Nienaber could even go as far as convincing Blues' speedster Mark Telea to represent the Springboks with Telea having both Samoan and South African heritage; his father hails from Johannesburg.

Leicester-bound Kobus van Wyk is also a possible option as too are Stade Francais' Ruan Combrinck and La Rochelle's Raymond Rhule. Finally, the uncapped trio of Louis Ludik, Duhan van der Merwe and Henry Immelman are all possibilities as well.

Our Springbok 23 from Australasia and Europe