Saracens marched to their 5th Premiership title in one of the best finals in recent memory. The final saw a number of records being broken as Nic White scored the fast try in a Premiership Final, while it was also the highest scoring final in the competitions history while Saracens claimed the biggest comeback in a final.

All in all it was an incredibly close game with both sides playing superbly which reflects in our ratings.

Solid in the scrum and went about his work around the park. He was pivitol in the mauls to set a strong base and made 7 carries and all 5 of his tackles before he was taken off shortly after half time.

Had one shakey throw at the lineout but was otherwise accurate. He came up with a try assist and made 7 tackles and 7 carries.

Carried well and was excellent in the rucks. Went close to scoring in the opening minute of the game and was solid untill his subsitution.

Aggressive and effective at the breakdown, came up with three steals and made 35 running metres from 6 carries.

Managed to force his way over the try line after the half hour mark. Made his tackles and carried well before Rob Baxter opted to freshen his pack up.

A huge performance from the blinside flanker! 19 carries, 7 tackles and turnover while racking up 34 running metres beating 3 defenders and dotting down to put Exeter in front after 22 minutes.

Armand spent a lot of time in the rucks and defending making 10 tackles. He didn't get the ball often enough to make a real impact on attack.

Played to his season's high standard hitting double digits in the tackle and carry stats while also forcing a number of turnovers and being a great option at the lineout. He did knock the ball on inside his half late on the clash which allowed Saracens to wind down the clock.

Set a new record for the quickest try in a Premiership final!

White kicked well, passed well and Exeter will certainly better with the Wallaby on the pitch. He combined well with Simmonds and probably shouldn't have been taken off in the 65th minute.

Controlled the Exeter attack well but missed a few crucial tackles and his kicking from the tee could have been better.

Had a few flashes of brilliance but just wasn't able to punish them enough. He beat 5 defenders and racked up 36 metres and could have been better in the air.

Linked up nicely with the likes of Slade and Simmonds on attack and like O'Flaherty he had a few moments of brilliance. He also managed to beat 5 defenders but was found wanting on defence.

Another excellent performance from the England centre. He shot up nicely in defence on occasion, scored a try and always looked threatening. He also beat 7 defenders on his way to making 51 running metres with a yellow card souring his performance somewhat.

What a brilliant @ExeterChiefs try!

The pass from Slade, the fend and the offload from Skinner 😍

In an intense, bruising game, that is a move of absolute quality! pic.twitter.com/FpGez8iJra

Came close to dotting after Slade kicked through a loose ball but largely unused on attack but solid enough on defence and was replaced after the hour mark.

Outstanding from the back for Exeter and could have been the spark Exeter needed in the latter stages of the game had he not succummed to an injury that saw him hobble off the pitch. He beat a match high of 9 defenders and made 50 running metres.

Quietly went about his work getting stuck into the rucks and on defence.

Abosulte massive making 20 tackles, scoring a brace and maiting a 100% accuracy at the lineouts. 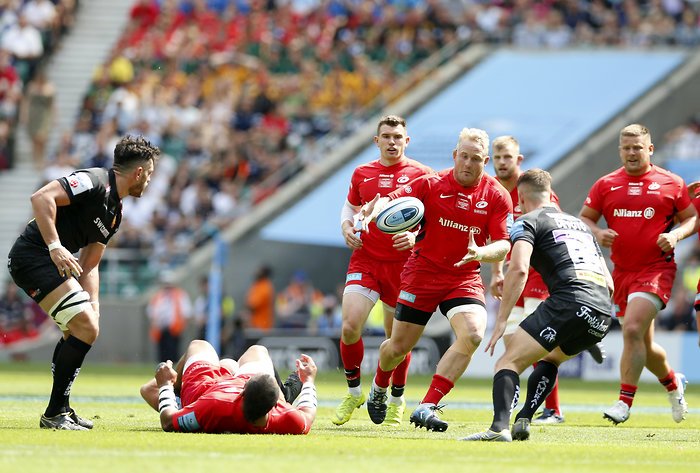 Koch was strong in the scrum and put in a massive 71 minute shift. Made 13 tackles and 7 carries and also came up with a turnover.

Exetremely strong with his ball carries and racked up 14 tackles as he got stuck into the Exeter pack. He was brilliant before being forced off the pitch for a second time on the hour mark.

Made a costly error in the opening minute of the game that Exeter punished. He covered to have a strong game at the lineouts while making 17 tackles, missing 4, and made a turnvoer.

"We had no choice. We have some fantastic leaders in that team."

"Far play to Exeter, they are a top top side."

Maro Itoje is your #GallagherPremFinal man of the match 🙌 pic.twitter.com/N2XQI0QAKK

Came up with a crucial lineout steal that lead to Jamie George's match winning try but was guilty of giving away a number of penalties, one of which leading him to sit in the sin bin for 10 minutes. He was crucial in the second half of the match and was named the man of the match.

Exetremely busy making 17 tackles, albeit he did miss three, in 55 minutes. Wray was excellent defensively winning two turnovers before he was replaced in the 55th minute.

Work rate! Vunipola made 15 carries, 15 tackles and was another Saracens' forward that was effective in the rucks. He assisted a try and produced three turnovers.

Started brightly with some nice kicks and pinpoint passes. He helped Saracens hit back quickly after White's try.

His game was cut short with an injury.

Ben Spencer burrows over and we have a real game on our hands here...

Got Saracens back into the game with a brilliant cross kick to Williams that put Saracens within just 4 points following Slade's try.

Farrell's rating is affected by some poor goal kicking, by his high standards but he was superb with his kicks from hand and made a telling impact on defence.

Stellar in the air, finished off a nice after the hour mark. Maitland made more running metres than any other player.

What a sensational counter-attacking try!

Saracens rugby at it's best! pic.twitter.com/Dn2Pw9Vc2B

Barritt was solid but did look off the pace and was taken off at half time.

Had some excellent reads on defence and some nice touches on attack to put his fellow backs into space, one in particular leading to Maitland's try.

He did miss 4 tackles but came up with two turnovers and completed 11 tackles.

Williams was his usual threat in the air and come up with the crucial try that put Saracens ahead. He didn't see too much ball but when he did he made the most of grabbing 31 running metres and was outstanding on defence.

Liam Williams is having some season 🔥 pic.twitter.com/VrKySEhoW8

Continued his fine form this season with another strong outing at the back. Kicked well, entered the line at the right time and played a crucial role as an addition first receiver.