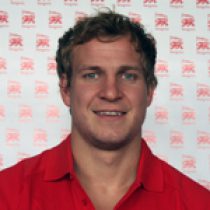 During his time with Sale,the openside represented England at both age grade level and Sevens.

In 2009 Hills left Sale travelling south to sign for London Welsh, quickly becoming a regular in the Exiles back row and made 19 appearances in their 2012/13 Premiership campaign.

Ahead of the Knights return to the Championship, he was made On-field Captain.