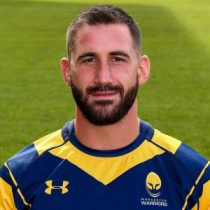 Born in Worcestershire, England, Cox is a versatlie forward, capable of operating on the flank, at number 8 or in the second row.

He began his professional career at Worcester Warriors in 2008 before linking up with Gloucester after two season. In his early days, Cox also represented England at Under 18, 19 and 20 levels as well as featuring for England Sevens.

The Redditch-born Warriors Academy graduate's form has also seen him pick up back-to-back Player of the Month awards in December and January 2018 – becoming the first Warriors player to win the award more than once, after previously picking up the gong for the first time in December 2015.

The powerful forward came through the ranks at Sixways, joining full-time in 2004, and scored a try on his Club debut against Wasps in 2008 before moving to Gloucester Rugby in 2010.

Cox spent four seasons at Kingsholm where he made 62 appearances and helped the Cherry and Whites qualify for the Heineken Cup in two campaigns while also winning the LV= Cup in 2011.

He returned to Sixways in 2014, playing an important role as Warriors won the B&I Cup and promotion to the Aviva Premiership in his first season back at his home Club.

Cox agreed a new two-year contract midway through the 2018/19 season during which he made 17 more first team appearances and scored one try - which helped Warriors defeat a powerful Stade Francais side in Paris.

Illness ruled him out of the opening weeks of the 2019/20 season but he returned to action in the European Challenge Cup win over Enisei-STM in Russia.

Cox made his 99th appearance for the club when he came off the bench in the return match against Enisei at Sixways in January 2020.