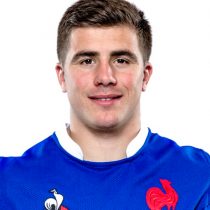 A headline of France's golden youth generation that won two titles U20 Championships in 2018 and 2019, Louis Carbonel is an incredibly talented flyhalf and the son of former RCT player Alain Carbonel.

Having represented the France U18s he signed a two-year deal with the Toulon Academy. The playmaker was called into the Toulon squad to travel to Paris to face Stade Francais in week 5 of the 2017-18 Top 14 season.

He went onto debut for the side at the age of 18 and would make a further 5 appearances for the side during the 2017/18 season.

He was included in the France u20 squad for the 2018 U20 Six Nations and helped the side win the competition.

Despite being one of the younger squad members of the France squad for the World Rugby U20 Championship, Cabonel was one of the side's leaders and guided the side to their maiden u20 World Championship title beating England 25-33 in the Final.

Carbonel kicked 23 points to inspire his side to a thrilling 33-25 victory over England.

He followed that with similar heroics during the u20 World Championships in Argentina in 2019. He kicked 14 points including the winning penalty with 15 minutes left to play as France defended their title.

In January 2020, Carbonel was called into the France Six Nations squad where he will look to make his test debut.

As of the start of the year, he has 34 Top 14 caps and 82 points for Toulon. He also has 8 appearances in Europe scoring 12 points.