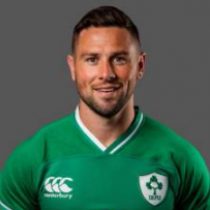 Cooney, a former Gonzaga College scrum-half, made his debut with the senior team in September of 2011 aged just 21 when he featured against Ospreys in Swansea.

The Treviso game at the RDS also saw Cooney score his first try for the Blues as he took an Isa Nacewa pass on the run and dived over for the fourth try in a bonus-point victory. The scrum-half’s breakthrough season had yet to reach its pinnacle as he was drafted into the Leinster squad for the Heineken Cup Final against Ulster at Twickenham.

Cooney entered the fray with six minutes remaining but found time to make a lasting impression as he played a prominent role in the build-up to Heinke van der Merwe’s late try.

He made 27 appearances for the RDS club before moving to Connacht for the 2014-15 season.

In January 2017, Ulster confirmed the signing of the scrumhalf on a two-year deal, moving to Kingspan Stadium at the end of the 2016/17 season.

In September 2018, Cooney signed a three-year contract extension at Ulster Rugby, keeping him at Kingspan Stadium until the summer of 2022.

In May 2019 he was selected in the Ireland RWC Training squad. He had already earned 8 caps.

Cooney secured his name for the 2020 Six Nations Ireland squad and added to his 8 caps.