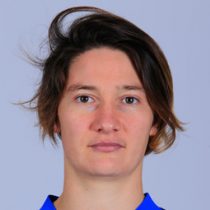 Tremoulier represented France at the 2014 Women's Rugby World Cup and also became a member of the squad that won their fourth Six Nations title the same year.


In November 2018, she was named World Rugby Women’s 15s Player of the Year 2018 at the World Rugby Awards, becoming the first French winner to receive the accolade.