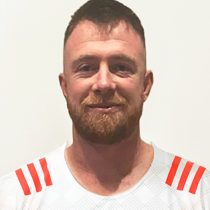 Having experienced his first taste of representative rugby playing for the NSW Under 17s side, Jed made the decision to return to Sydney ahead of the rest of his family to further his career.

Moving in with Owen Finegan’s parents Pat and Josie until his parents relocated to the Sutherland Shire, he finished his schooling at Waverley College before joining the Southern Districts club in 2011.

His decision soon paid off as he earned a place in the Australian Schoolboys squad that toured Samoa and NZ in 2010. After a year in Colts, in 2011 he won a second grade Grand Final with Souths.

In 2012 he was a member of the high profile Australian U20s squad that competed in the IRB Junior World Cup in South Africa, rounding off a successful club season by becoming part of the first Southern Districts side to reach a first grade premiership Grand Final.

Despite losing to Sydney University, his consistent form throughout the year did earn him one piece of silverware, as he was voted Shute Shield Rookie of the Year for 2012, following in the footsteps of Bernard Foley and Kane Douglas.

Joining the Waratahs in 2013, Holloway made his Super Rugby debut against the Force the same here. He has gone to score 20 points in 13 appearances.

Holloway took his Super Rugby tally to 41 by the end of the 2018 season as he featured in all of the Waratahs matches as they reached the Super Rugby semi-final.

The versatile forward's efforts with the Tahs was rewarded with a call-up to the Wallabies squad.

In September 2019, he signed a short-term deal with Munster, he made five appearances for the club during his two month spell before returning to the Waratahs ahead of the 2020 Super Rugby season.

He heads into 2020 with 52 Super Rugby caps. In October 2020 he announced a move to Toyota Verblitz to play in the Japan Top League