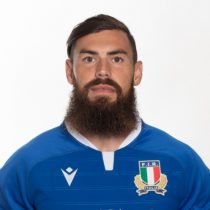 A flyhalf or centre by trade, Hayward has spent the majority of his professional career in his home nation of New Zealand.

Born in Hawera in Taranaki, the versatile back made 58 appearances for his home province in the NPC and played 48 Super Rugby matches for the Highlanders, Hurricanes and Force, scoring 120 points.

Since joining Treviso in 2014 and switching to fullback, he qualified to play for Italy through residency.

Hayward made his Test debut for Italy against Fiji in Catania on 11th November 2017 and made two other appearances for Azzurri in 2017 earning him a spot in Italy's 2018 6 Nations squad.

He currently has 92 caps for Benetton and 21 for Italy.