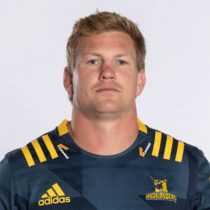 Lentjes joined the Highlanders early in the 2015 campaign after a number of loose forward injuries that prompted he be called up from ITM cup level.

Lentjes went on to play six games during the season after debuting against the Stormers in Dunedin. Injury limited his appearances during the middle of the season but he returned for the business end of the season and started in all three finals series games. A mobile loose forward, Lentjes gets around the park well and is a strong runner with ball in hand.

Lentjes has once again been included in the Highlander Super Rugby squad for the 2017, having made 10 appearances for the Dunedin-side.

Lentjies' season was once again hit by injury in 2017 after breaking his arm against the Crusaders he did, however, manage to make 6 appearances for the Highlanders including their historic win over the British & Irish Lions.

Lentjies is likely to miss the opening stages of the 2018 Super Rugby season for the Highlanders after undergoing surgery on his shoulder.

Lentjes had an unfortunate past couple of seasons with injury but managed to impress in the limited game time he had in the 2019 Mitre 10 Cup season.

With a handful of leaders leaving the club, the openside flanker will need to embrace a leadership role to what is a relatively young team.

James was named as captain of the squad ahead of the 2020 Super Rugby season.