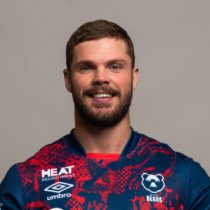 The Oxford-born flyer has developed his game in Cherry and White after joining the club off the back of lifting the Junior World Championship with England U20s in 2014.

After helping the Cherry and Whites to the Singha Premiership 7s crown at the Twickenham Stoop, Purdy made his first team debut against Exeter Chiefs in September 2014 going on to notch up 26 appearances in his debut season, scoring 9 tries and also playing the full 80 minutes in the European Rugby Challenge Cup Final.

In November 2016, he signed a new contract that saw him at the Cherry and Whites beyond the 2017 season.

Following a few games for Hartpury, Purdy was released from his Gloucester contract and took the opportunity to play in the Southern Hemisphere as he signed for Otago ahead fo the 2019 Mitre 10 Cup.

In August 2019, it was confirmed that Purdy will join Coventry Rugby by November 2019. Purdy joined the side on a short-term deal in January 2020.

Having played 82 times for Gloucester during a five-year tenure at Kingsholm, he went on to score against his former club on his full debut for Bristol at Ashton Gate.

Following an impressive start to his career at Ashton Gate, Henry Purdy signed a two-year contract with the side.