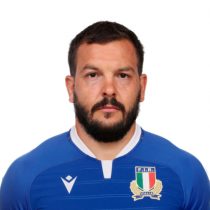 Guglielmo Palazzani is a pacy scrum half who is currently playing his club rugby at Zebre. Beginning his career at Calvisano, he made 48 caps for the Italian regional side before being picked up by Zebre in 2013. Good performances in the 2013/14 season led to his inclusion in the 2014 six nations squad, where he made a handful of appearances. Further strong performances from Zebre saw him selected for the Italian squad for the 2015 Rugby World Cup.