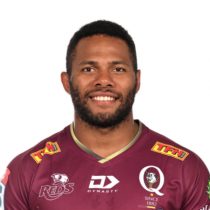 A former Fijian soccer youth international, Daugunu is an incredibly talented sportsman who has also played for the Fiji 7s side.

In 2017 he moved to Brisbane to play club rugby and quickly caught the attention of Queensland talent scouts.

He was included in Brad Thorn's Queensland Country side for the 2017 NRC season.

He had a blistering start to his NRC career scoring 10 tries in the first 4 matches for Queensland Country and signed a deal with the Queensland Reds for the 2018 Super Rugby season.

He finished the season with 13 tries and scored a fantastic hattrick in the final as Queensland went from bottom of the log in 2016 to champions in 2017.

Daugunu enjoyed a fine first season in Super Rugby scoring 37 points (6 tries) in 14 matches and scored one of the tries of the tournament.

In September 2018 he signed a new two-year deal with the side keeping in Ballymore until 2020.

After 21 appearances for the Queensland side, he signed a new deal that will see him at Ballymore until 2023. In 2019, his impact was limited to seven Super Rugby matches after breaking his arm against the Stormers in Round 8 and was consequently sidelined for six games.

He returned in fine form for the Reds scoring 6 tries in 13 games across Super Rugby and Super Rugby AU and was subsequently named in Dave Rennie's first Wallabies squad of 2020.